Robert F. Lyon was born and raised in Queens, New York. He received a BA degree in Studio Art and Art Education from the College of New Jersey, (formerly Trenton State College), Trenton, New Jersey. In 1977 he was awarded the MFA degree with a concentration in ceramics and glass from the Tyler School of Art, Philadelphia, Pennsylvania where he studied with Robert Winokur, Rudy Staffel, Italo Scanga, and Jon Clark. He joined the faculty of the School of Art at Louisiana State University in 1978 where he taught ceramics, glass and sculpture for seventeen years. In 1997 he was named Professor and Chair of the Department of Art at the University of South Carolina. In 2002 Professor Lyon relinquished his position as Chair, and now teaches sculpture. Robert Lyon has been the recipient of several awards and grants, which include a National Endowment for the Arts Visual Artists Fellowship in sculpture and a Southeastern Artists Fellowship from the Southeastern Center for Contemporary Art. Professor Lyon has been an artist in residence at the International Turning Exchange sponsored by the Wood Turning Center, Philadelphia, PA, Artpark in Lewiston, New York, Sculpture Space, Inc. in Utica, New York, The Banff Center in Banff, Canada, and the Kohler Company in Kohler, Wisconsin. He resides and works in South Carolina, along with his wife, painter, Ann Hubbard. www.annhubbard.net

In 2013 he was named an Individual Artist Fellow in Craft by the South Carolina Arts Commission for FY2014. 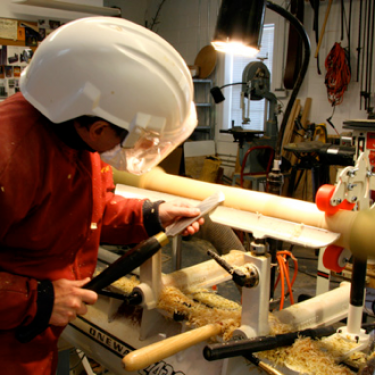