After a dart thrown at a map and 20 years in Portland, Oregon, Kristin Mitsu Shiga moved to the Big Island of Hawaii to become part of an active creative community there in 2017. She has been practicing and teaching metalsmithing, enameling, book arts, and mindfulness practice since 1992.

As a maker, Kristin pursues projects that tell a story and actively engage her audience/collaborators. Her ongoing body of work entitled “Unfinished, Damaged & Broken” draws analogies between our relationships with other people and with the imperfect objects with which we surround ourselves. She is deeply inspired by her participation in various artist collaborations, and has had the privilege of attending collaborative events around the world since her first Emma in 2008 (where the term “Tiny Shiny” was first coined!).

Kristin has shown her work internationally and is included in several notable collections, including the Kamm Artful Teapot Collection and the Permanent Collection of the White House. You will find her work published in numerous books and magazines, including Art Jewelry Today, The Art of Enameling, Metalsmith’s 2017 Exhibition in Print, and several of Lark’s 500 Series books. Learn more about Kristin on Oregon Artbeat (segment originally aired in 2010).

Hailing from a long line of teachers, Kristin values her role as teacher above all. She currently splits her time between the studio, classroom, and Donkey Mill Art Center, a studio-based community art center where she serves as Program Director. 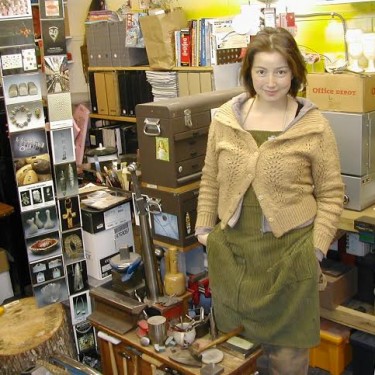