Sculptor Jason Ramey admirably stakes out and navigates a psychological landscape taut with existential metaphors and personal narratives. At the same time, he unflinchingly confronts the problematic historical debates between the visual arts and crafts, furniture and props, display and architecture by employing the tropes of these dichotomies in his work. When one experiences Ramey’s work, his acknowledgement of the ill-defined space between art, craft, and design practice is not immediately apparent. That is his intention. What’s primary is his uncanny ability to stretch vernacular signifiers, through formal and material intervention, into intimate emotional stages. His heavy use of found objects suggests that his work is contoured by storytelling, memories and industrious objectives. His human-scaled spaces delineate small domestic theaters and pop-up tragicomedy plays. Yet Ramey deftly imbues his work with a spectrum of critical thinking, embracing modernist functionalism and narrative drive while simultaneously disrupting distinctions between high and low, fragmentation and autonomy, originality and authorship.

Noted historian and theorist Glenn Adamson has built a career out of mapping craft’s power structures, locating its authority in the economic and political manifestations of the language. Identifying craft’s cultural influence as well as articulating its limitations is important work. It is work that Ramey intellectually commits himself. Yet the political underpinnings of craft are peripheral to his practice. His core theme is place- a familiar and domesticated place where a viewer can identify the conditions that shape humanity. For Ramey, it is not only the production of craft that humanizes but also the literal representation of space and body.

Drawing on personal narrative Ramey says in his artist statement that” growing up, I was often curious about who might have constructed the walls in my family home, and what type of people they were.” Were they like me? Are they still alive? “These walls weren’t just inane parts of my childhood home, they were my childhood.” Memory is bound up in the space that enfolds our material world- the people, the furniture; the crown molding are props and markers. Ramey’s statement contemplating the original builder of his childhood home elegantly fuses Ramey as artist, as builder, and as questioner. “I wondered this because these walls were keeping me safe, and I had no idea who put them there.” Who were [those people] and why did they build these walls for us?” Such musings reflect a profound emotional attachment to domesticated space, and that is what Ramey infuses in the spaces with his wall-and-furniture constructions.

Ramey’s spaces without enclosure are still intimate and private. His open-form constructions integrate only one or two domestic elements, a sparseness that refutes public exchange. The walls are confident in their delicate role protecting private space; they embrace and even engulf the surrogate furnishings that also conspire to create a reflective and psychologically charged domestic domain. 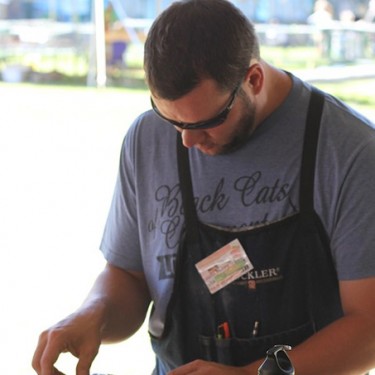