Jamie’s work is distinguished by its carefully considered combinations of traditional and unexpected materials, cunning technical detail and meticulous hand-finishing. It often blurs the line between jewellery and sculpture, running a gamut of styles from quietly elegant carvings in jade and delicately engraved and inlaid metal sword-fittings through to striking and slyly humorous sculptural collaborations with damasus steel-smith, Scott Sanz. Tactile and alluring, the work invites intimacy:

“… for me the best pieces are those that - beyond their immediate impact - have something in them that tugs at the corners of the mind… a niggling suspicion that you just missed something almost breaking the surface. Pieces that hint at older, more elemental states and darker, more internal spaces. Pieces that urge you to explore, to touch, to follow the half-heard voices with your mind as you trace its lines with your fingers. To turn it over in your hands and catch just a glimpse – like a fish in dark water - of the larger, stranger puzzle that exists in someone else’s imagination.”

Originally from Dunedin, New Zealand, Jamie began studies in jewellery and metalworking at the Sydney Institute Design Centre in 1995. On graduation he spent a further 6 years at the Design Centre as technician and tutor while also gaining experience working with other jewellers and private jewellery schools. First exposed to South Australian jade through NSW lapidary club “rock festivals” in the late 90’s; Jamie’s initial efforts in stone led eventually to him being drawn home to New Zealand to study Hard Stone Carving in Greymouth on the South Island’s west coast. He is now based close to the mighty Heathcoate River in Christchurch, New Zealand, where he has been adopted by a precocious cat and a 90-year-old walnut tree. 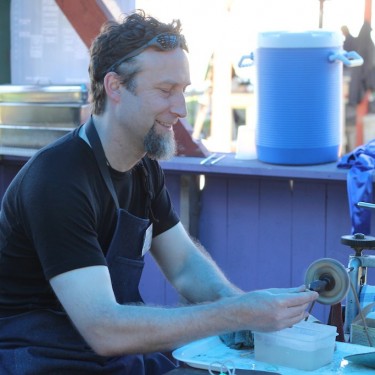