Doug Haslam works primarily in wood and employs traditional and contemporary techniques to create furniture and sculptural forms. Offered as a response to material and process the work is informed by the artist’s personal interaction with nature, architecture and culture.

Having maintained an active role in the visual arts community for many years Doug Haslam has exhibited his work locally, nationally and internationally in private and public galleries and is represented in a number of private and public collections. Doug has received numerous grants and awards from and served on juries for the Alberta Foundation of the Arts (AFA) and the Canada Council. The artist has also received public commissions from the AFA, the City of Calgary, the Government of Alberta, the Alberta Medical Association and Chinook Centre.

Doug Haslam has sat on the boards of the Calgary Allied Arts Foundation, the Southern Alberta Woodworkers Society, and the Advisory Committee for the Fine Woodwork program, Selkirk College and the Series program, Red Deer College.

Doug currently holds the position of Head Preparator at the Esker Foundation gallery in Calgary where he coordinates the installation, striking and lighting of the contemporary art exhibitions that take place there. Esker Preparator Video

In addition to his ongoing practice and role with the Esker, Haslam has taught woodworking through Chinook Learning Services of the Calgary Board of Education, designs and constructs mounts and shipping systems for the TREX travelling exhibitions program of the Alberta Foundation for the Arts and is a governor of the Aeolian Recreational Boundary Institute 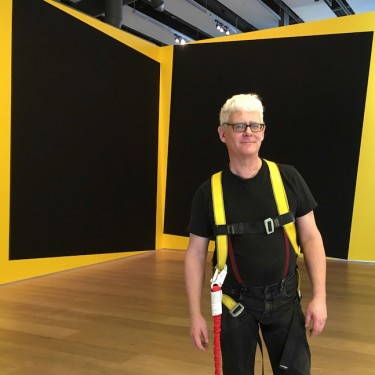