David Bynoe is a kinetic sculptor based in Calgary, Alberta, Canada.

He studied at the Alberta College of Art in Design, where he majored in Jewllery and Metals under Charles Lewton-Brain, and Dee Fontans. During the summers he furthered his education by working at Heritage Park Historical Village, where he learned to operate a 1910 electric street car, and taught himself how to blacksmith. He also attended an exchange program with NSCAD University, taking courses in silversmithing and product design

In 2005, David volunteered with the Glenbow Museum in Calgary Alberta, where he worked extensively with the European and Japanese armor collection. This led to a contract with the museum’s art department, to catalogue a collection of work by Sybil Andrews, a British/Canadian printmaker.

Between 2008 and 2009 he spent 15 months at the Banff Centre, working as a studio workstudy in the Visual Arts department. Here he assisted scores of artists and facilitators, from a wide variety of disciplines, primarily in the woodworking and metal shops.

During this time he constructed two skin on frame kayaks, in the Aleut style. These boats were built with a traditional wooden frame, but with a modern nylon skin. These kayaks, been taken on several trips, including to the Broken Group Islands in Barkley sound.

In late 2009, David was selected by the City of Calgary’s public art department to run a four day open studio at the World Skills Olympics in Calgary. Here he gave live demonstrations on steam bending, carving, and whittling to thousands of school kids attending the event. The sculpture produced from this project is currently installed in the EPCOR Centre for the performing arts in downtown Calgary.

In June 2012 he had a solo exhibition of his sculpture Machine for Preserving the Wind at Truck Gallery in Calgary Alberta.

He continues to work in his shop on a variety of projects. When not in his studio he can often be found in the Rocky Mountains carrying a 15lb canoe of his own design into remote lakes and tarns. 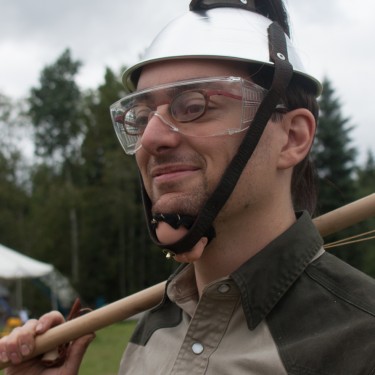