Being the son of a World War II flight engineer and a mother that actually directed my future towards the trades, since she thought I wouldn’t make a good “Rocket Scientist”, I guess repairing and building machines is in my blood!!

Building minibikes and go-karts, maintaining snowblowers, lawnmowers, snowmobiles and eventually cars and motorcycles was a regular day to day task of living a somewhat self-sufficient lifestyle growing up as a youth in Saskatchewan during the 60’s and 70’s.

My appreciation and fascination with mechanical concepts and machines developed greatly as I attended trade school in Saskatoon and later was able to achieve Journeyman status in the Industrial Mechanic/Millwright trade at the age of 21 years old. I spent 19 years employed as a Journeyman in the mining and large industrial manufacturing and repair plants. Outside of raising a family, countless hours for my passion of machines and fabrication extended into the weeknights and weekends in my home shop.

My artistic adaptation of the use of mechanical machine design concepts as an art form strengthened greatly as I became an instructor of my trade for which I have been since the year 2000 at Saskatchewan Polytechnic (formally SIAST) at the Saskatoon Campus. I am totally thankful for the amazing collaboration and extensive knowledge base amongst fellow instructors not only in my department, but from others such as the Welder/Fabricator, Machinist, Automotive, Autobody and the Electronics programs.

Currently my art tends to infuse industrial machine concepts, components and parts along with the fabrication and forging of metals in order to produce not only static but dynamic or operational/functional work pieces.………………..as a former student informed me a number of years ago while looking at some of my work, “that’s totally Steam Punk!!”, well that was a new term to me, but I guess he was right!! 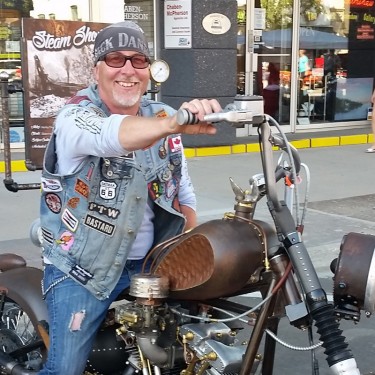