Otis Tamasauskas was born in Terschenreuth Germany in a displaced persons camp in 1947, following his parents’ flight from Lithuania after the Russian communist occupation.

Tamasauskas brings together found artifacts, integrating objects such as pelts, clumps of horsehair, and wood panels with his prints in order to explore interior landscapes. “His prints operate on an abstract level as wall art, but closely viewed they reveal themselves as Jungian in construction: the Aberdeen Series is a refinement of the self-referential veil-of-ink motif” (Deirdre Hanna, 1986). Moreover, his integration of found objects into the prints enhances the connection between his art and the real world. There is also, for him, a relationship between the art he has undertaken and his experience with Lithuanian design.

Tamasauskas’s interest in Lithuanian folk art began as a child, when he traced Lithuanian symbols in books on Lithuanian folk art and design.”When I made my first print,” he has written, “I knew this was it, it was what I wanted to do, in life. I guess, the idea of being able to use a plate, or block; print it many times, side by side, sequential images provided a vicarious explanation of obsessive patterns that reoccur in Lithuanian folk art, and design, relating to my early visual experiences” (1998).

Tamasauskas refuses to remain within the conventional confines of printmaking, choosing instead to experiment with collage as a means of developing rich textural surfaces. Both Trout and Orchid (1980) and Shorebird P.E.I. (1980) combine lithography with collage to create a dynamic printed surface that escapes the often static nature of traditional printmaking.

In Ancient Tree - Balancing River Series #12 (1993), Tamasauskas uses sheets of metal and carved wood nailed to board, as well as printing on paper, conveying the tree through material as well as imagery. His prints undergo numerous phases, each phase infusing the work with a different quality that enhances the overall design, colour and texture. He feels “there is an intimacy with paper which allows an artist to communicate a brief passage or a fleeting idea which is too fragile to convey with a big canvas or masonite or any other structural material” (1981).

Tamasauskas was Master Printer and Director of Etching at Open Studio in Toronto and has taught printmaking at McMaster University in Hamilton (1978 to 1980), Scarborough College, University of Toronto (1978 to 1983), and Queen’s University in Kingston (1980 to present). 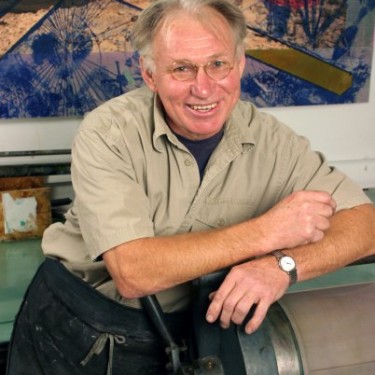