Lisa Geertsen is an artist blacksmith in Seattle, Wa. She has owned and operated Firelight Forge since 2007, operating solely on custom commissions ranging from architectural work to sculpture. In 2013 she accepted the position of Metal and Stone Sculpture Studio Manager at Pratt Fine Arts Center in addition to the classes she teaches there regularly. This position allows her to design and schedule the classes offered at Pratt in Stone Carving, Bronze Casting, Fabrication and Blacksmithing.

Lisa completed her BFA in sculpture from WVU in 1997 and has worked as a blacksmith and a high-end fabricator for various businesses, including three years working with Master Blacksmith, Darryl Nelson. As an active member of the Northwest Blacksmith Association, she oversees the gallery portion of their conferences and teaches hands on workshops occasionally.

In addition to teaching regularly at Pratt Fine Arts Center for over ten years, Lisa has been a guest instructor at WVU, University of Washington, Blue Hell Studios and for the Western Reserve Blacksmith Association. She has demonstrated for groups such as SOFA, WRABA, FABA and the Bonneville Forge Council.

Her work has been shown at NWBA and ABANA conferences as well as group shows in Colorado, Maryland, Florida, Oregon, Washington and Hawaii. She curated a survey of contemporary ironwork, NW Anvil, for four years and currently has the largest exhibit of her work on display in Olympia, Washington. This exhibit has 48 pieces from her hearts series and is aptly named “Show of Hearts” with work ranging from raku fired ceramics, small detailed chasing and repousse’ work to large scale forged sculpture including some collaborations with glass and wood artists.

The transformation of the metal with heat and controlled force, changing the shape from cold and hard into beautiful and delicate, is what appeals to her the most. Each piece of metal has a story to its shape. The effort that has been spent to create the movement or warmth of the piece is told with each hammer blow.

For Lisa, making art is about making a connection, physically, spiritually, mentally. It’s about telling a story, stepping outside a comfort zone, pushing oneself, making the ordinary and mundane into something meaningful and beautiful. She hopes to engage others to experience these moments and trigger something within them that sparks a connection. 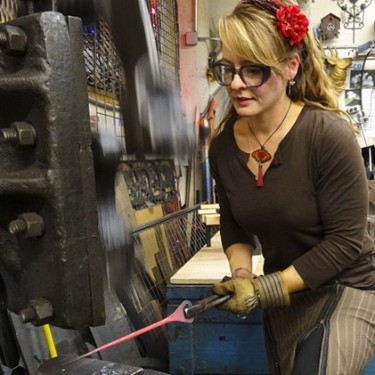