Adam John Manley was born and raised in the Adirondacks of Upstate New York. His Father was a carpenter and boat builder, and his mother was a weaver. After attending SUNY New Paltz, in the Hudson Valley, where he received a BA in International Relations and Political Science, Adam fell in love with woodworking and making furniture. After college, he and a small group of craft-based artists started a small gallery and cooperative studio, where Adam built a portfolio for graduate school while working as a professional furniture maker. Adam Received his MFA in Furniture and Woodworking from SDSU in 2012, where he focused his work on sculptural objects using furniture as a jumping off point. The work explores the relationship between people, places, and objects. Since receiving his MFA, Adam has exhibited nationally from San Diego to Maine, including shows at Space Gallery in Portland Maine, The Hunterdon Museum in Clinton New Jersey, The Oceanside Museum in Oceanside California, UW Madison’s galleries, and the Kipp Gallery in Indiana Pennsylvania.

Adam is now Assistant Professor of Furniture Design and Woodworking at SDSU and is preparing for a solo exhibition entitled ‘Ordinary Rendition’ in Indianapolis, February-April of 2018. 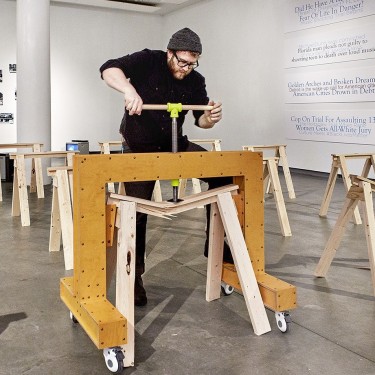